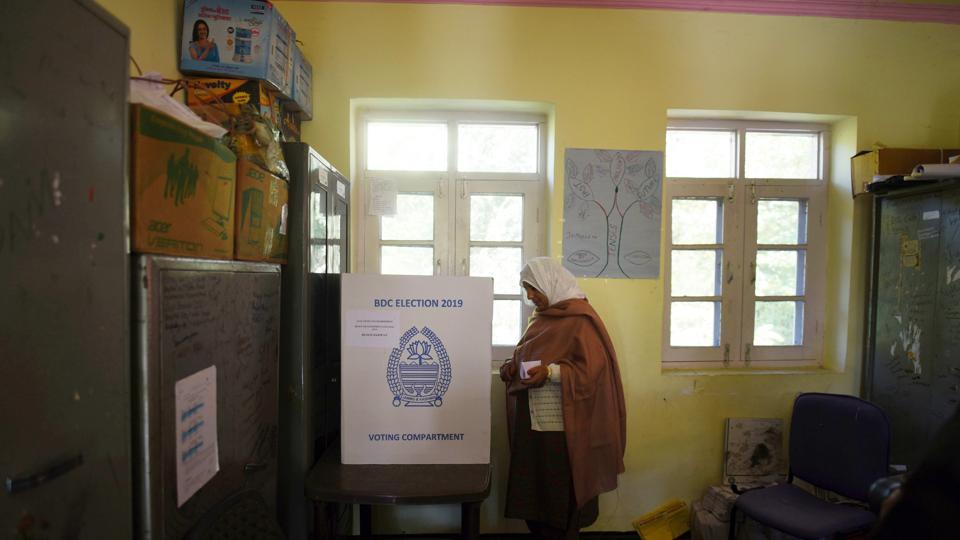 Why India is headed for better times, writes Jay Panda

Image Source - The election to block development councils in Jammu and Kashmir bodes well. It shows that the democratic spirit is alive, and is a step towards normalisation (Hindustan Times)

Subdued in the hubbub surrounding the results of assembly elections in Maharashtra and Haryana last week were two other developments that would otherwise have drawn far more attention. One, the World Bank’s Ease Of Doing Business (EODB) rankings saw India make another big leap from number 77 to 63. The other was local elections in Ladakh and Jammu and Kashmir (J&K), held on schedule and with a high turnout.

These three developments have significant implications for the medium term. First, the election results. Some tried to portray this as a setback to the Bharatiya Janata Party (BJP), but the reality is rather different. While, indeed, the numbers were lower than what opinion polls had predicted, they nevertheless herald the BJP’s return to government in both states. Some Opposition parties did better than had been expected. However, the end result is that five years of incumbency in these states, with the economy growing slower than last year, was not enough to convince voters that there could be a better alternative.

A few commentators even concluded that the BJP’s “emphasis on nationalism had failed and it needed to focus on the economy instead”. If being returned to government, albeit with reduced numbers, is equated with failure, I suspect all political parties would prefer to fail, rather than having to repeatedly keep claiming moral victory while being consigned to the opposition.

But, in fact, that is a false binary, and both nationalism and the economy are important. Of course, the series of terrorist attacks on Mumbai and other cities in the Indian heartland that used to be commonplace some years ago have been checked. But that does not mean the threats have evaporated. It took a clear-eyed, commonsensical approach to national security to achieve that, and will require sustained effort to keep India safe.

On the other hand, the government has responded with a series of measures in the past several months to address the reduced GDP growth rate. The impact of that has already been felt on the bourses, and, in due course, will undoubtedly be felt in the broader economy.

To those with a big-picture, dispassionate view, India’s latest jump in the World Bank’s EODB rankings would have come as no surprise. In a sustained thrust over the past five years, India has sharply improved year after year, from a dismal 142nd to now 63rd. However, those fixated only on highlighting the short term setbacks, real though these are, might struggle to make sense of this sort of global approbation.

That overall positive view of India around the world is helped by distance, of being removed from the day-to-day cut and thrust of our politics, of seeing the improvements as well as the challenges. It recognises the many steps taken in these past few years to make India a better investment destination.

That is borne out not just in sentiment, but in the actual sharp rise of Foreign Direct Investment (FDI) into India. Of course, international observers still think India needs to do more to attract investment, and, indeed, we should do more in our own interest, to boost both foreign as well as domestic investment.

The third development, of elections to the block development councils (BDCs), especially in J&K, bodes well for democracy and development in the region. Ironically, our polarised politics means that some are even finding fault in something that should be universally cheered. This ought to be food for thought for more thoughtful Indians, to recognise that many of those accusing others of polarising the polity are, in fact, themselves guilty of it.

BDCs are indeed indirectly elected, as are their urban equivalents, city councils. Though there may be merit in arguing for direct elections to both, that is a separate argument applicable for all of India. To quibble about it only when J&K has successfully conducted them for the first time ever, whereas the rest of India does it routinely, is at best pointless.

Their other argument, about the electors having come through low-turnout panchayat elections, is stunningly oblivious to reality. Though J&K elections typically had low turnouts in the past, due to intimidation by Pakistan- backed terrorists, the panchayat elections had turnout of 43% in the Valley and 74% overall, one of the highest in recent decades.

It is indeed terrific that over 25,000 of these electors turned out to vote last week. Although violence in J&K post the constitutional amendment to Article 370 has been almost entirely contained, the threats by terrorists cannot be taken lightly. They have murdered a handful of traders, including two last week, both non-locals as well as locals who dared to open their shops in daytime.

That is a strong indication that the democratic spirit is alive and well in the Union Territory, and a major milestone towards full normalisation. All three developments last week are a sign of better things to come.