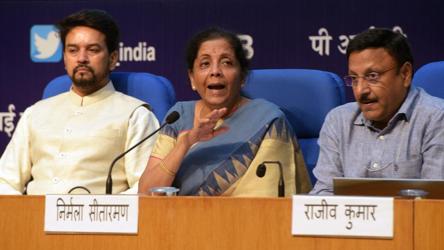 The roots of the economic slowdown

When, in his Independence Day speech, Prime Minister Narendra Modi extolled the vital role of India’s wealth creators, it was reminiscent of China’s then paramount leader Deng Xiaoping’s iconic exhortations four decades ago. From that moment, China’s economy began turning around, from being almost on par with India on a per-capita basis to becoming nearly five times bigger.

It did so by shedding the legacy of Mao Zedong’s socialist economy in all but name. In the process, China’s economy set a double-digit pace of growth, helping it become the world’s second-largest economic and military power. It also lifted many hundreds of millions of people out of poverty, with the percentage of its population living on less than $2 a day, falling from 38% to 6% now.

India took another dozen years to start moving away from the statist economy launched under Jawaharlal Nehru, who was reported to have said, “Profit is a dirty word.” Though, since 1991, it too has lifted 300 million people out of poverty, India’s turnaround is still a work in progress. And despite being the world’s fastest-growing large economy for most of the past five years, many are today expressing concern about the economy slowing down.

Political commentary on the slowdown is black and white, whereas the many shades of grey are important and worth understanding. Most importantly, unlike in some parts of the world, India’s economy is not shrinking, but rather its rate of growth has reduced, from 8.2% two years ago to a projected 6.2% for this year. That still puts it among the world’s fastest-growing economies, albeit not what India is capable of, or aspires to, and needs.
A random scan of the financial newspapers reflects the churn in the economy. Contrasting with reports about the slump in the automotive industry are those about the flourishing e-commerce sector. Last week, for instance, juxtaposed next to each other, there were stories about India’s largest carmaker seeking government help for the sector, and Amazon opening its largest global campus in Hyderabad, employing more than 15,000 people, as well as committing to even more investment in India.

The present shallower growth can be traced to a few causes. First, most of the global economy has been facing problems for the past year. This has impacted exports, which have further been hit by trade wars. On a far lesser scale than between the US and China, India too has had mild skirmishes with both on the trade front.

Second, despite significant and long-pending reforms of the economy under the late Arun Jaitley, it is still work in progress. The Modi government’s first term saw many big-ticket reforms, such as the Goods and Services Tax (GST), the bankruptcy code, and the scrapping of hundreds of obsolete laws. While they have begun kicking in — GST revenues now routinely top Rs 1 lakh crore per month, and India’s ranking on the World Bank’s ease of doing business has zoomed from 142 to 77. Yet there are many legacy bottlenecks. These include our Kafkaesque labour laws that asphyxiate investment in manufacturing.

Third, arguably the biggest contributor to the presently less aggressive “animal spirits,” is the overhang of the banks’ non productive assets (NPAs). Its roots are based in the often reckless and sometimes fraudulent lending of a decade ago. The setbacks faced by many crony capitalists, who could no longer finagle their way out by lobbying, has depleted the ranks of India’s old-style industrialists.

There were other causes too, such as the Reserve Bank of India (RBI) unfathomably keeping interest rates too high for several years, when, because of sustained low inflation, it should have been doing exactly the opposite. This had been flagged repeatedly by Jaitley. That combination of largesse a decade ago without proper diligence, and the subsequent squeezing of liquidity for half a decade when conditions favoured loosening credit instead, significantly affected investment. The RBI’s much belated rate cuts will help in due course.
Last week, finance minister Nirmala Sitharaman announced measures to help boost the economy. Contrary to some allegations of the government having been unresponsive, she had in fact spent the past few weeks having discussions with industry bodies, taking feedback and suggestions.

Some of these announced measures bring to fruition plans that Jaitley had initiated, such as the use of technology for “faceless” tax assessments, to drastically reduce arbitrariness, unfairness, bias, corruption, and so called “tax terrorism.” Others include concrete new steps on most of the above-mentioned root causes that have kept the economy from reaching its true potential. The release of Rs 70,000 crore for banks, the streamlining of labour laws and other vestiges of the inspector raj, and other steps to boost investment and consumption, ought to help reinvigorate the mood.

It is worth remembering the weakened condition of India’s economy five years ago when ruing its current state. Despite the recent slower growth, India continues to be one of the world’s brightest spots. Of course, it is justified to want to unclog the remaining constraints in India’s economy in order to fuel much higher growth rates and job creation. Towards that, the PM’s exhortation to wealth creators was a seminal moment, and sends the right signals.