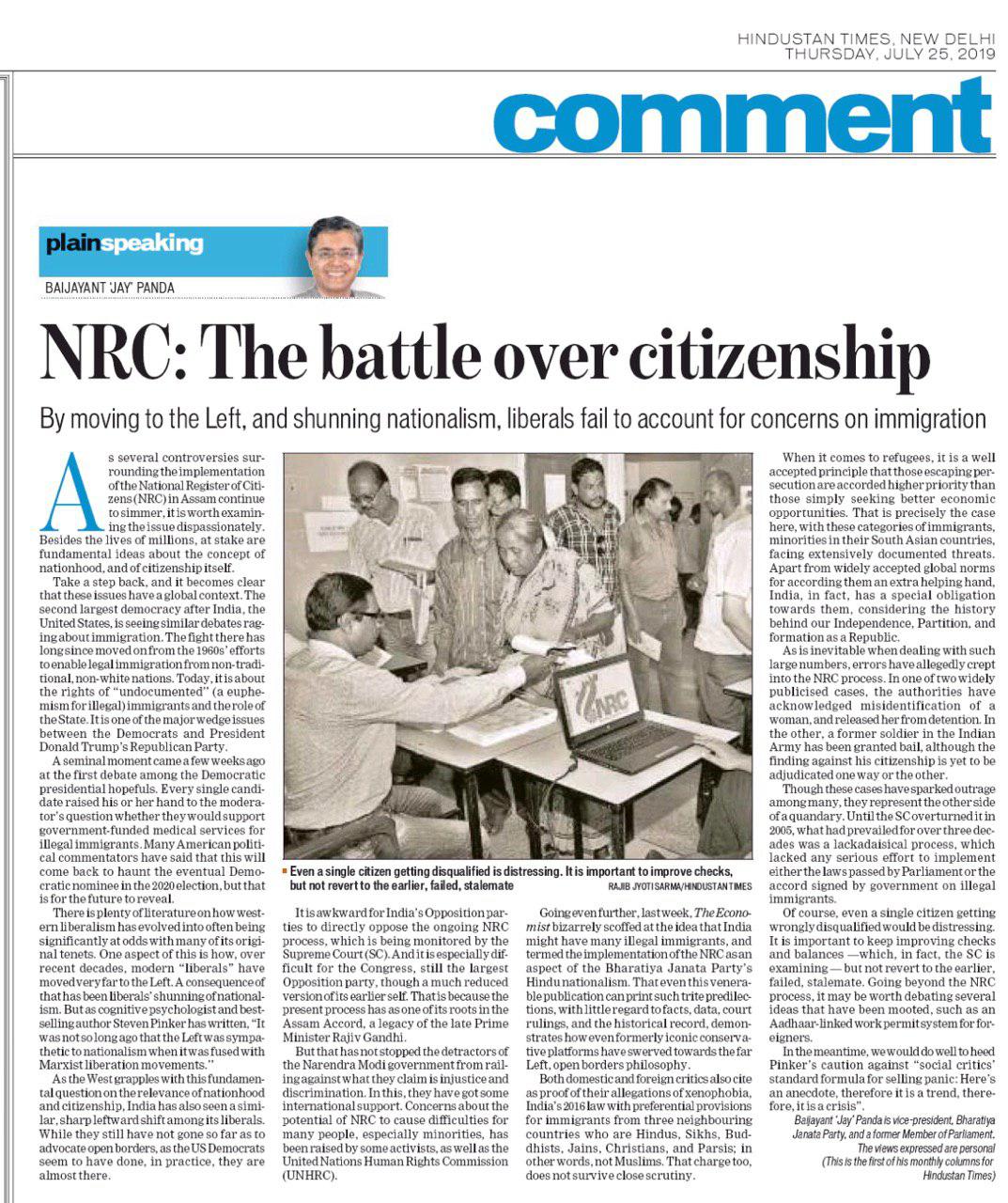 By moving to the Left, and shunning nationalism, liberals fail to account for concerns on immigration

As several controversies surrounding the implementation of the National Register of Citizens (NRC) in Assam continue to simmer, it is worth examining the issue dispassionately. Besides the lives of millions, at stake are fundamental ideas about the concept of nationhood, and of citizenship itself.

Take a step back, and it becomes clear that these issues have a global context. The second largest democracy after India, the United States, is seeing similar debates raging about immigration. The fight there has long since moved on from the 1960s’ efforts to enable legal immigration from non-traditional, non-white nations. Today, it is about the rights of “undocumented” (a euphemism for illegal) immigrants and the role of the State. It is one of the major wedge issues between the Democrats and President Donald Trump’s Republican Party.

A seminal moment came a few weeks ago at the first debate among the Democratic presidential hopefuls. Every single candidate raised his or her hand to the moderator’s question whether they would support government-funded medical services for illegal immigrants. Many American political commentators have said that this will come back to haunt the eventual Democratic nominee in the 2020 election, but that is for the future to reveal.

There is plenty of literature on how western liberalism has evolved into often being significantly at odds with many of its original tenets. One aspect of this is how over recent decades, modern “liberals” have moved very far to the Left. A consequence of that has been liberals’ shunning of nationalism. But as cognitive psychologist and bestselling author Steven Pinker has written, “It was not so long ago that the Left was sympathetic to nationalism when it was fused with Marxist liberation movements.”

As the West grapples with this fundamental question on the relevance of nationhood and citizenship, India has also seen a similar, sharp leftward shift among its liberals. While they still have not gone so far as to advocate open borders, as the US Democrats seem to have done, in practice, they are almost there.

It is awkward for India’s Opposition parties to directly oppose the ongoing NRC process, which is being monitored by the Supreme Court (SC). And it is especially difficult for the Congress, still the largest Opposition party, though a much reduced version of its earlier self. That is because the present process has as one of its roots in the Assam Accord, a legacy of the late Prime Minister Rajiv Gandhi.

But that has not stopped the detractors of the Narendra Modi government from railing against what they claim is injustice and discrimination. In this, they have got some international support. Concerns about the potential of the NRC to cause difficulties for many people, especially minorities, has been raised by some activists, as well as the United Nations Human Rights Commission (UNHRC).

Going even further, last week, The Economist bizarrely scoffed at the idea that India might have many illegal immigrants, and termed the implementation of the NRC as an aspect of the BJP’s Hindu nationalism. That even this venerable publication can print such trite predilections, with little regard to facts, data, court rulings, and the historical record, demonstrates how even formerly iconic conservative platforms have swerved towards the far Left, open borders philosophy.

Both domestic and foreign critics also cite as proof of their allegations of xenophobia, India’s 2016 law with preferential provisions for immigrants from three neighbouring countries who are Hindus, Sikhs, Buddhists, Jains, Christians, and Parsis, in other words, not Muslims. That charge too, does not survive close scrutiny.

When it comes to refugees, it is a well accepted principle that those escaping persecution are accorded higher priority than those simply seeking better economic opportunities. That is precisely the case here, with these categories of immigrants, minorities in their South Asian countries, facing extensively documented threats. Apart from widely accepted global norms for according them an extra helping hand, India, in fact, has a special obligation towards them, considering the history behind our Independence, Partition, and formation as a Republic.

As is inevitable when dealing with such large numbers, errors have allegedly crept into the NRC process. In one of two widely publicised cases, the authorities have acknowledged misidentification of a woman, and released her from detention. In the other, a former soldier in the Indian Army has been granted bail, although the finding against his citizenship is yet to be adjudicated one way or the other.

Though these cases have sparked outrage among many, they represent the other side of a quandary. Until the SC overturned it in 2005, what had prevailed for over three decades was a lackadaisical process, which lacked any serious effort to implement either the laws passed by Parliament or the accord signed by government on illegal immigrants.

Of course, even a single citizen getting wrongly disqualified would be distressing. It is important to keep improving checks and balances —which, in fact, the SC is examining — but not revert to the earlier, failed, stalemate. Going beyond the NRC process, it may be worth debating several ideas that have been mooted, such as an Aadhaar-linked work permit system for foreigners.