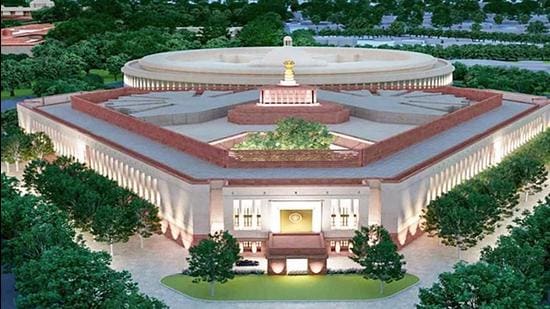 The central hysteria behind Central Vista

Safety and functionality dictate the need for a new Parliament building. It is simply de rigeur to oppose anything that Prime Minister (PM) Modi says or does, no matter what its merits, nor the logic or rationale behind it, and even if you have to contradict your own earlier stand on the subject.

The resistance to the national Capital’s Central Vista redevelopment project by the anti-Narendra Modi galère exemplifies a key feature of Opposition politics and activism of the current era. It is simply de rigeur to oppose anything that Prime Minister (PM) Modi says or does, no matter what its merits, nor the logic or rationale behind it, and even if you have to contradict your own earlier stand on the subject.

This has come to be the norm for several years among a certain category of Left-liberals, bereft of their decades-long grip on the levers of government. Even the last remaining Opposition members who had thus far at least attempted to sound reasonable, have now joined the mindless Modi-bashing clique over the Central Vista project.

First, however, it is useful to examine the backdrop of the project. All through my 19 years in Parliament, I would see the many glaring safety deficits of the complex and wonder when tragedy would hit. Apart from safety and security concerns, it is also blindingly obvious that the complex is simply unsuitable for the functioning of any modern Parliament, let alone that of the largest democracy the world has ever seen.

To take just one eye-popping example, this pre-Independence complex does not have offices for its members. Sure, there are a few rooms for ministers and committee chairpersons, but well over 90% of Members of Parliament (MPs) have no place to work from, let alone workspace for assistants. This is in stark contrast to all modern democracies, where legislators have offices for themselves and their often large teams, including highly qualified professionals. On each of the dozens of MP delegations I have led to other nations, every single one of my colleagues has commented on this aspect.

Just three years ago, many among the Opposition complained about the lack of adequate space and individual rooms for MPs in the Indian Parliament. Even Speaker Meira Kumar had accorded approval for the need to build a new Parliament building.

A big reason for our Parliament’s shortcomings was that it was not intended by the colonial rulers to be a full-fledged temple of democracy, but was rather a begrudging concession to the nationalist movement. Which is why additions had to be constructed in recent decades to accommodate pressing needs, such as the large Parliament Annexe complex, and the new Parliament library. In any event, the redevelopment of the Central Vista will preserve the grand colonial Parliament building as a symbol of our heritage.

However, now the Opposition has been running a targeted campaign against the Central Vista redevelopment, resorting to logical fallacies such as claiming that funds allocated for the project should have been used for payment of the minimum support prices (MSP) for grains, for which some farmers have been agitating. Such false analogies seek to push disinformation about alleged waste during the pandemic. The two issues are not connected and, in fact, the Modi government has been ensuring MSP payment with unprecedented alacrity.

The reality is that funds have not been a constraint in tackling the Covid-19 crisis; the expenditure on the Central Vista during this period is only a small fraction of the project cost; and the thousands of direct and indirect jobs generated is exactly why public construction projects are needed in the current economic situation. It is for good reason that the Delhi high court and the Supreme Court described it as an “essential project of national importance” and dismissed pleas against it as “motivated” and “selective”.

Some Opposition members make a concession to the need for offices for MPs, but their other demands are telling. For instance, couched in logic about the age and aesthetics of the buildings, without taking into account the overall design, Congress MP Shashi Tharoor recently opposed the planned demolition of Jawahar Bhavan, while saying he has no such compunction about the similar fate of Shastri Bhavan. Of course, the subtext of such preferences is no mystery to any observer of the Congress “darbari” culture, but, in this particular case, there is a much deeper angst among some about this project.

In their claim that no one was consulted and falsely alleging that the expert opinion of architects and environmentalists has not been sought, the Opposition betrays the still scathing heartache of a dispossessed elite. It fits the classic analysis by Thomas Sowell, the nonagenarian doyen among western conservatives, that liberalism has decayed into doctrinal authoritarianism by an elite class of “the anointed”.

These self-appointed elites, who consider themselves the moral, social and aesthetic high priests of society, cannot conceive that the hoi polloi might actually know what is good for themselves and for society.

It is thus entirely understandable that “the anointed” among the Congress party believe that the native Modi’s marginalisation of the Lutyens’ elite will merely be a symbol of “governmentalism” and “not any great architecture of 21st century India”.

They couldn’t be more wrong. All they have to do is compare the Parliament Annexe, a legacy of the Lutyens’ elite at the height of the Congress’s power, and a true symbol of their banal imagination, with the stunningly aesthetic Ahmedabad river front redevelopment by then chief minister Modi.