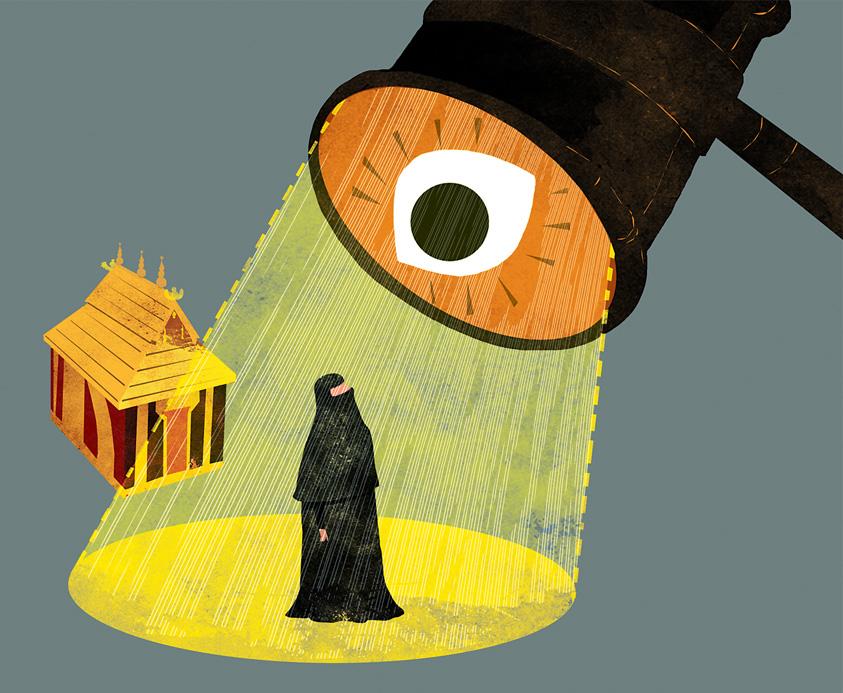 Sabarimala and triple talaq: The two situations are different, courts cannot see them the same way

Many people are keen that temples like Sabarimala should remove restrictions on women devotees, but also that this come about through religious reform from within the community, rather than a court verdict. Some may believe the recent Supreme Court ruling enforcing reform promotes secularism, in fact it does the opposite.

So should the state – government, legislature, or court – never intervene in religious practices? What about the banning of sati, caste discrimination and, as happened recently, instant triple talaq? There, i believe the state was justified in intervening. What is the distinction, you ask? Plenty.

Before addressing the differences from those situations, it is important to understand that the prevailing Indian iteration of secularism is different from what the term usually means in modern democracies, which is separation of church and state. This was discussed in this column earlier. As should only be expected, India’s attempt to “treat all religions equally” is plagued by subjectivity that undermines secularism.

This subjectivity has led to a bizarre situation, where the majority religion in India experiences extraordinary interference from the state, unlike anything seen elsewhere. It is almost as if the Indian state distrusts Hindus and, throwing aside all pretence of secularism, exercises direct control over their religious institutions.

In India, places of worship of Hinduism, and Hinduism alone, experience the following: control and management by government including altering religious rituals; government control over administrative and financial decisions including diverting income for other purposes; temple income subject to tax; government role in the management of educational institutes run by religious bodies; ban on preferential hiring within the faith if the institute receives government funding; and so on.

While some of these may make sense in principle, such as non-discriminatory hiring by institutes availing government funds, it is simply unfathomable why this ought to apply to only one religion. And provisions like government administrators having final say on temple rituals of only one religion, besides indicating systemic bias, are decidedly non-secular by any standard.

This kind of state interference in religion is peculiar. There are theistic states that discriminate against religions other than the official one (think Pakistan or Saudi Arabia). There were and are theistic states that behave in a somewhat secular manner, with much greater tolerance of non-official religions (think of the late Ottoman Empire or present day Dubai). There are secular states that are perceived to exercise bias in favour of the majority religion (Turkey in recent years). But India seems to be unique, the only democratic, secular republic that meddles in the places of worship of only one religion, that of the majority population.

So what about those other religious reforms that came about through state intervention? Surely, we must all agree that banning sati, untouchability, and instant triple talaq are good things? Yes, absolutely. However, there are two distinctions between those and the restrictions at temples in Sabarimala, Puri and the like. Both are well-demonstrated with examples from India as well as the US, the democratic republic with the oldest and deepest commitment to separation of church and state.

First, the state has a responsibility for each citizen’s individual constitutional rights that transcend the rights of the religious group to which he or she may belong. The classic example is the US Supreme Court’s ruling that a child’s immunisation cannot be dispensed with because the adults in her religion deem it against their faith.

India’s prohibition on sati, caste discrimination and instant triple talaq fall in this category, making it entirely rational for the state to intervene to ensure the citizen’s individual rights. These issues impact citizens in their everyday life, and our Constitution mandates that the state ensure equality for all.

This idea is further embellished by a contrarian US Supreme Court ruling, entitling a baker to refuse to sell cake for same sex weddings on the basis of his religious beliefs. While this has dismayed some, the underlying principle has a certain consistency (think of a Jewish or Muslim butcher refusing to sell pork). The disappointed couple can find an alternative baker, whereas a child whose immunisation is blocked by parents on religious grounds has only the state to aid her health.

The second distinction about the state intervening in the practices at a place of worship, as opposed to citizens’ daily life in the wider world, is the venue itself. While it is every citizen’s prerogative to practice any religion, or none, it cannot be every individual’s right to impose his version of a religion on others who profess it. Thus, while he may practice religion as he pleases in private, in a religion’s place of group worship, the rituals, subject to not harming anyone, must reflect the group consensus.

Treating a place of worship like an office or a college will not work. Female college students often assert their right to wear clothing of their choice on campus, and rightly so. But no visitor to a Buddhist stupa or Sikh gurdwara, man or woman, would insist on violating their dress codes. Similarly, many mosques in the UK seat women only at the back, and while their government would not countenance such segregation in buses, this it considers the business of the congregation.