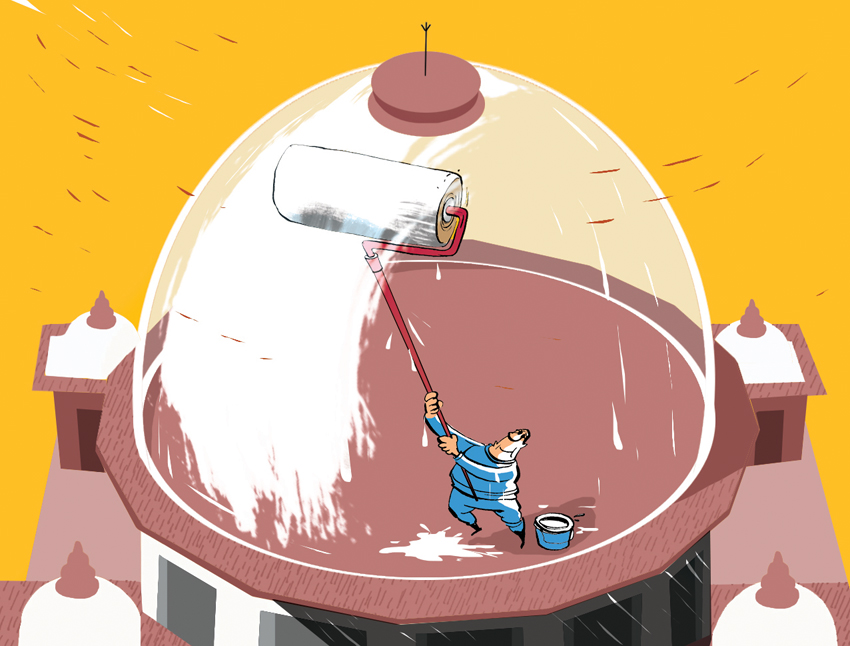 Not very collegial: The Supreme Court is split wide open today due to its opaque collegium system

Last week’s unprecedented press conference by four Supreme Court (SC) judges against the Chief Justice of India (CJI) again exposed the deep cracks in this crucial constitutional pillar. Recent weeks had seen unseemly jockeying among the nation’s seniormost judges, but there had been a fig leaf of pretence that it would all blow over.

Sadly, this breakdown was inevitable. And not just because of personality clashes and allegations and counter allegations of impropriety, although there were plenty of those. It was inevitable because of a fundamental contradiction between India’s peculiar manner of appointing judges and the irresistible pressure for transparency that democracies foster.

India is unique in the higher judiciary appointing itself. This came about only a quarter century ago, when after a series of path breaking judgments from 1981, the SC decided in 1992 that India’s judicial independence could only be maintained if it took over the process itself.  For this, it set up the so-called collegium in 1993, consisting of the CJI and the two seniormost judges.

All this had followed from controversies surrounding the SC during the Emergency, including certain surprising decisions it had taken, as well as the supersession by government of a highly respected judge for elevation as CJI.

The collegium had then saved the day by bringing a halt to the government’s pernicious influence on the judiciary during that era, but it has far outlived its usefulness. In fact, its severe limitations are the root cause of today’s sorry state of affairs.

Before the collegium, India had simply continued with the British Raj system of the government’s unchallenged say on judicial appointments. That, without the checks and balances crucial to democracy, had enabled government interference in the judiciary.

But the collegium suffers from something that is at least as bad as governmental interference, and abhorrent in a democracy: total lack of transparency. Many have commented on this, including retired judges. There are widespread insinuations of favouritism, nepotism, groupism, victimisation and ego clashes, which have sometimes prevented outstanding candidates from being selected as high court or SC judges.

Sooner or later, such internal contradictions were bound to tumble out into the open. Though there have been murmurings for long, the fact that such an ugly spat didn’t happen in public for 25 years is something of a miracle.

This does not mean that we should go back to the colonial era system of government appointing the higher judiciary without checks and balances. All respectable democracies have evolved judicial appointment procedures that provide a key role to the executive, but with checks and balances from other stakeholders, like the legislature, eminent personalities, laypersons, and occasionally even a limited role for the judiciary itself.

Even the UK, whose system we had emulated until the collegium, has implemented radical reforms, enacting the Judicial Appointments Commission (JAC) in 2005. Importantly, judges constitute a minority of the JAC, with an equal number of members, including the chairman, being laypersons!

Largely modelled on that, India’s Parliament had enacted the National Judicial Appointments Commission (NJAC), but with an increased role for judges. With 50% of its members being SC judges, and it being chaired by the CJI, who would also have a say in choosing some of the other members, the NJAC was designed to retain the preeminence of the judiciary.

But alas, it was not to be, with the SC striking down NJAC in 2015, saying it did not provide for “judicial primacy” and therefore could not ensure judicial independence. It is tragic that the SC did not countenance a system of appointing judges that, though taking away its sole authority, nevertheless gave it the maximum say in comparison to the judiciary of any respectable democracy. In fact, the composition of the NJAC had essentially given the judiciary a veto over judges’ selection, unparalleled in any other nation.

While clinging on to its self-declared solo role in higher judicial appointments, the SC nevertheless acknowledged the indefensibility of the collegium’s lack of transparency. Thus, in overturning the NJAC, it stipulated that a Memorandum of Procedure (MoP) be drawn up for the specific roles and responsibilities of both collegium and government.  Later, it also ruled that the collegium’s decisions on judges’ appointments be made public, along with reasons for someone’s rejection.

But neither has happened. The MoP got embroiled in a dispute with the government, which insists on a veto if there are national security concerns about a potential judge, whereas the SC ruled that even then the collegium should have the last word. And some judges have now come out against the SC ruling requiring the collegium to make public the reasons for rejecting someone for judgeship, on the grounds that it would affect their reputation.

That is the crux of the issue, for no democracy should have to worry so much about the reputation of unsuitable judicial appointees as to keep the process secret. Which is exactly why most democracies have a public process, with checks and balances. The immediate crisis now has been papered over. But for the system to heal, the process of higher judicial appointments needs a fundamental rejig. SC would do well to review its NJAC decision; if it does not, Parliament must re-enact something similar.