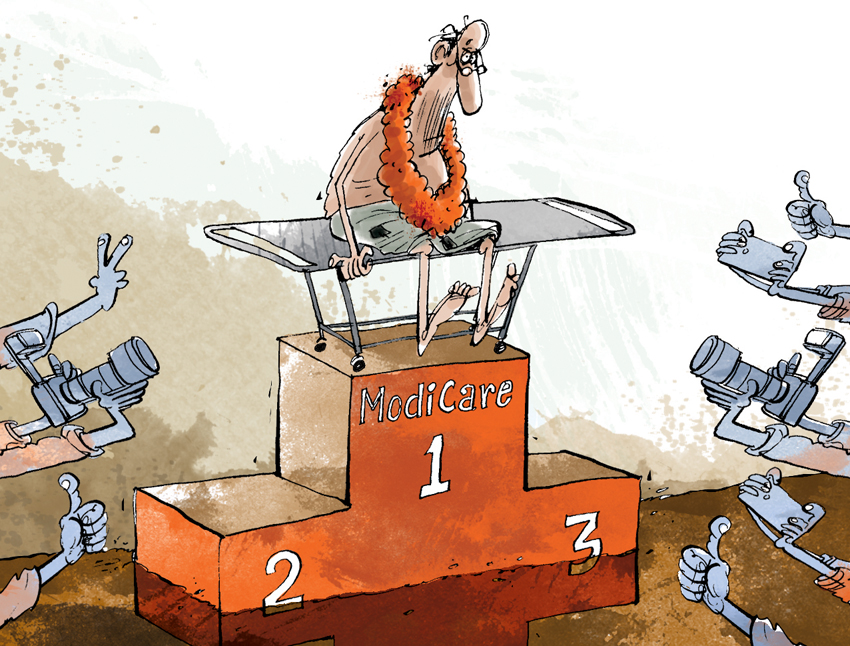 Can ModiCare work? Critics doubt its funding but a sharp, counterintuitive strategy may ensure funds

As far as election year Budgets go, this last full fledged one of the Modi government’s first term belied predictions of populist excess. The buzz had been building that in anticipation of uphill electoral battles, the PM would throw caution to the winds and dole out freebies to all and sundry. That did not happen.

In fact, privately many opposition politicians are breathing a sigh of relief, believing they have more of a fighting chance in the next elections in the absence of widespread governmental largesse. Time will tell if they are right or wrong, but the point to be noted is that such relief represents conventional wisdom.

That is not to say this Budget lacks ambitious social and political goals. It is worth examining the unconventional approach it takes for that, namely the healthcare plan targeting nearly 40% of the population. Dubbed as Modicare by some, it has elicited a full range of reactions, from being called unworkable to revolutionary.

It is still early days and many details of the plan are awaited. Nevertheless, there is enough already in the public domain about its broad contours for an initial assessment. No one questions the scale of its ambition, touted as the biggest healthcare plan in the world. But most critics allege that it is impractical and that the funding allocated for it is woefully inadequate. Is it?

It might seem so at first glance, but closer examination reveals an approach that might qualify as a sharp, counterintuitive strategy.

To begin with, some pundits miscalculated the numbers immediately after the Budget, misreading the hospitalisation entitlement of Rs 5 lakh as if it were for 500 million beneficiaries. In reality, the entitlement is per family for 100 million families.

The second grossly-off-the-mark punditry, at least on many TV panel discussions in the aftermath of the Budget, counted the total payout as if every family would avail of it in full. In reality, of course, not every family experiences hospitalisation for one or more members every year. And those who do will on average avail far less than the full Rs 5 lakh.

A third objection is that the Rs 2,000 crore allocated for this plan in the Budget is a pittance. Later, it became clear that this represents 60% of the expected insurance premiums, with the states expected to bear the balance 40%. However, critics allege that even then, the combined Rs 3,333 crore would still be far short of what is needed. Are they right?

The answer is both yes and no, but with a twist in the tale that has interesting ramifications, possibly indicating a shrewder political strategy than opponents have figured out. Critics make two sub-arguments here: first, that the insurance premium would be many times the Niti Aayog’s estimate of Rs 1,000-1,200 per family; and second, that even if Niti Aayog is right, the funding needed for the premiums would be Rs 10-12,000 crore, not Rs 3,333 crore.

But most critics, even non-political ones, proffer only broad alternative guesses rather than detailed estimates. Moreover, many acknowledge that the sheer size of the plan, covering an unprecedented 500 million beneficiaries, implies significant cost reductions from existing rates that are not easy to estimate.

Niti Aayog’s estimate is likely correct, backed by detailed analysis and corroborated by Andhra Pradesh’s existing Rajiv Aarogya Raksha plan, which costs Rs 1,200 per individual for Rs 2 lakh cover for more than 1,000 diseases. The much larger scale of Modicare should see similar premiums per family, even for a higher cover. The second argument that even then, and even after including the states’ contribution, the allotted funding adds up to only a portion of the required amount, is a more relevant question.

The answer to that must surely lie in the near certainty that not all states will hit the ground running in the first year. Since this plan is as much of a surprise to them as to anyone, many states will need time to get their act together, to figure out how much they can allocate, and the nuts and bolts of the scheme. Of course, by next year the funding allocation for Modicare in the Union Budget will need to be sharply increased.

There are other wrinkles to be ironed out as well, such as where many of the beneficiaries will go for hospitalisation, how smoothly (or not) the system will work, and so on. Recent years have seen several similar healthcare plans, albeit smaller, at both state and national level. They have had a mixed record, but one that encourages optimism. That is because of the surge in private medical facilities that can be harnessed by government.

Finally, the use of technologies like Aadhaar are revolutionising the delivery of services far more efficiently. It could well be that massively ambitious socio-political goals may no longer require the kind of massive boondoggles they used to.

Meantime, the PM’s party has an opportunity to rapidly roll out Modicare in the states it runs. If it can demonstrate early success stories, it would be child’s play for the master communicator to sell it to voters, and to rub opponents’ noses in it in states that are slow off the mark.