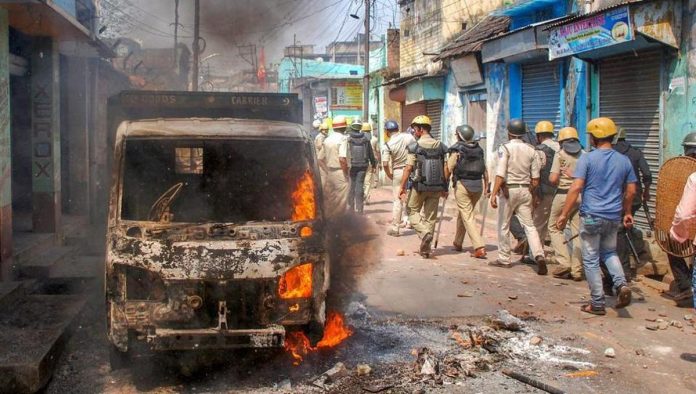 Delhi’s Hauz Qazi incident shows how media white-washes reportage when victims happen to be from the majority community.

As a young boy growing up in 1970s India, I developed a reading habit, in part by emulating my parents’ morning ritual of poring through newspapers. While I enjoyed reading the national papers, I was often befuddled by the particular way they covered some types of crimes.

There was reportage of routine, ‘normal’ crimes, including robberies and murders, sometimes with gory details. And then, there were occasional reports of assaults and deaths that were puzzlingly vague. Unlike the former, the latter never revealed the names of the perpetrators, but alluded to “clashes between two communities”. It took my young mind several years to figure out what they meant, and the rationale for why they were reported differently.

Things have changed now, and it is worth understanding the implications. Seven decades ago, India’s Partition had seen religious strife and gruesome communal violence on a scale rarely seen anywhere, at any time. While Pakistan from its inception was a theocratic state, India chose an egalitarian Constitution that guaranteed equal rights to all citizens. The republic’s founders were clear that the Muslims who remained in India deserved assurances that they would not be discriminated against here.

From Gandhi to Jawaharlal Nehru, who became the first prime minister, and Sardar Patel, who many felt ought to have had that distinction, all repeatedly reiterated that assurance. Although some commentators have tried to credit Nehru more and Patel less in the degree of their commitment to such principles, the truth is different. Rajmohan Gandhi’s authoritative biography, Patel: A Life, documented the Sardar’s iron–fisted efforts to bring a balkanised India together and establish equal protection for all its citizens.

There is no better proof of that promise being honoured than a simple comparison of the demographics of the two nations from Independence until now. Pakistan’s Hindu community has come down to 1.6 per cent now, while India’s proportion of Muslims has in fact grown, to more than 14 per cent today.

It was not just political leaders in newly independent India, but also the news media who took it upon themselves to help restore and maintain normalcy at the time. In the aftermath of Partition, a norm took hold, an early form of political correctness, that aimed to avoid stoking already inflamed passions.

Since totally suppressing news of riots went against journalistic ethics, they did the next best thing and tamped down the reportage of communal violence, as compared to that of other violent crimes. Besides being far less lurid, it became commonplace to not name the communities to which the victims and perpetrators belonged.

But for at least two decades now, most media platforms have overcome this reticence, although with a twist. And that twist has led to a yawning gap in their credibility as perceived by large sections of the population. In a form of mollycoddling, this new norm not only names but also puts extra emphasis on incidents of communal violence when the victims happen to be from the minority community and perpetrators from the majority, and plays down, even whitewashes, reportage when it is the other way around.

To ignore the rise of vigilantism in general, and to downplay a communal angle in them other than the dominant narrative, is a disservice to news reporting. Scientist and columnist Anand Ranganathan has extensively documented such bias in mainstream media’s reportage of hate crimes.

There is no better example of this bias than an incident in Delhi last week. When a place of worship was ransacked and vandalised by a mob from another community in Hauz Qazi, for two days much of the national media simply did not report it. They not only did not disclose the communities to which the perpetrators and victims belonged — in stunning disregard of their own current norms — but censored the news altogether.

That censorship was not dictated by anyone, least of all the government. It was self–imposed. The irony in that should be self–evident. The same mainstream media outlets who claimed to be under pressure from an allegedly majoritarian government, even as they continued to report communal incidents that they placed at the doorstep of its sympathisers, had no compunction in whitewashing a significant example going against that narrative.

Of course, in this era of social media and with half–a–billion Indians on the internet, it is no longer possible to suppress information. So, the news went viral, but also took several news platforms’ credibility one notch further down in the minds of many.

It is no one’s case that mainstream media should be irresponsible, nor, of course, that they should fan the flames of communal incidents. But it is equally irresponsible to consistently present bad news in one preconceived angle. Just like the Constitution says, and the founders of the republic practiced, media too should treat the rights and obligations of every Indian on an equal footing.