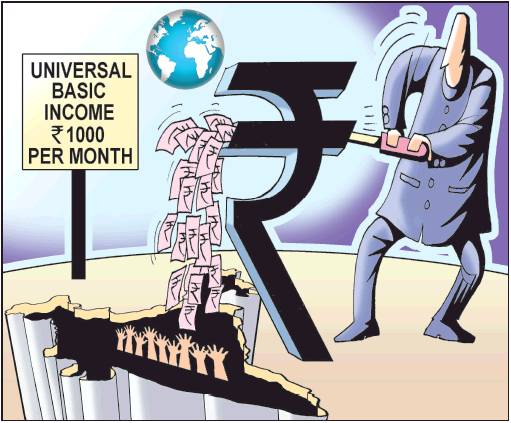 Several years ago, in discussions with economists Vijay Joshi, Pranab Bardhan and others, i was persuaded that Universal Basic Income (UBI) was an idea that deserved serious consideration. They had done notable work on it, felt it was viable, but rued that no politician in India had taken it up, and urged me to do so.

I wrote about UBI in this column, and spoke in Parliament and conferences around the nation. But at that time only one other peer spoke up for it, Jammu & Kashmir’s Haseeb Drabu. Subsequently, in the Economic Survey of 2017, the government’s then chief economic adviser Arvind Subramanian took it up, raising hopes among many that a UBI would be launched.

But despite the Modi government’s major thrust on cash transfers in lieu of subsidised physical goods, most notably with the world’s largest such scheme for LPG cooking gas, it held back on launching a UBI. Meantime, other politicians have picked up the slack and there is now a political race to outdo each other with new schemes.

India’s two biggest challenges, jobs and agriculture, are not just of the past five years but long running sagas. Both are serious, exacerbated by decades of poor policies. India missed the bus in earlier decades, while many Asian nations bootstrapped themselves out of poverty with high economic growth rates. Now, when India has become the world’s fastest growing large economy, radical new technologies are ensuring that far fewer jobs are created than earlier.

Similarly India’s agriculture policies, devised for 1960s food shortage crises, solved that problem but are now themselves the source of huge new problems. Over the decades, the minimum support price (MSP) induced and made possible farmers’ heroic production of grains, eradicating shortages. It continues to do so now, even though there is vast surplus production of grains, a lot of which rots in godowns or gets consumed by rats.

Thus, governments have gradually become miserly with MSP, giving the opposition ammunition to target their heartlessness. This saga keeps playing in a continual loop, irrespective of which parties are in government and opposition. Clearly, a better solution than MSP must be found. But dumping or restricting MSP until that happens will only increase farmers’ misery manifold.

Politicians’ traditional solution has been to waive farm loans. That provides immediate relief to some farmers, and yields political dividends, like in state elections last December. But it has a cascading effect of hurting investment and worsening the fiscal deficit, which in turn weakens the rupee and fuels inflation. Worst of all, it only benefits a minority of farmers.

A survey by the National Bank for Agriculture and Rural Development (Nabard) indicated that only 36% of farmers take loans from institutional sources, making governmental waivers irrelevant to most. Even among farmers who could benefit from waivers, many are excluded due to conditionalities like land ownership. For instance, the Punjab government’s loan waiver scheme announced in June 2017 covered only a fifth of the state’s 2.6 million farmers. And even then, till December 2018 only 35% of the funds have been disbursed.

Cash transfers are a far better solution. Their delivery to beneficiaries is radically more efficient, especially with new technologies and biometrics helping to bypass much of the leaky, corrupt, government administrative system. But even more important, besides giving a financial leg up to the farmer, it frees him up to take rational decisions on what to grow.

Intriguingly, more than a decade ago two incumbent chief ministers – Chandrababu Naidu and Vasundhara Raje – had publicly flirted with such ideas, but somehow did not pull the trigger. The most talked about of the new initiatives is Telangana’s Rythu Bandhu scheme, which is being seen as a win-win that offers a better policy alternative to farm distress than loan waivers, while also paying huge political dividend. It is thus no surprise that others are hurriedly following suit, including Odisha with its Kalia scheme, and the Union government with its Rs 75,000 crore national scheme for farmers’ income augmentation.

And now, opposition leader Rahul Gandhi has raised the stakes, committing to a national minimum income guarantee if his party comes into office. He has thus become the first leader of a national party to do so, which will count if and when UBI ever becomes a reality.

The three most common concerns people have about UBI is whether it will dampen the will to work; if the numbers make sense; and why should it be universal. First, the Rs 1,000 or so per month that is being talked about, enough to keep people out of penury but not in luxury, will not hurt the incentive to work.

Second, experts believe UBI can be funded with massive savings in existing subsidies, not necessarily by eliminating them but by cutting fraud. For example, when Chandigarh replaced ration cards with cash transfers, savings of 30% ensued after biometrics de-duplicated beneficiaries.

Finally, making basic income universal solves many problems, such as those technical hurdles about farmers’ eligibility linked to land ownership. It also gives the poor a lifeline, and options, without being attractive enough for the likes of you and i to bother availing it. But yes, new technical solutions could make a targeted basic income feasible too.

Cash transfers’ delivery to beneficiaries is radically more efficient, especially with new technologies and biometrics helping to bypass much of the leaky, corrupt, government administrative system. Even more important, it frees up the farmer to take rational decisions on what to grow