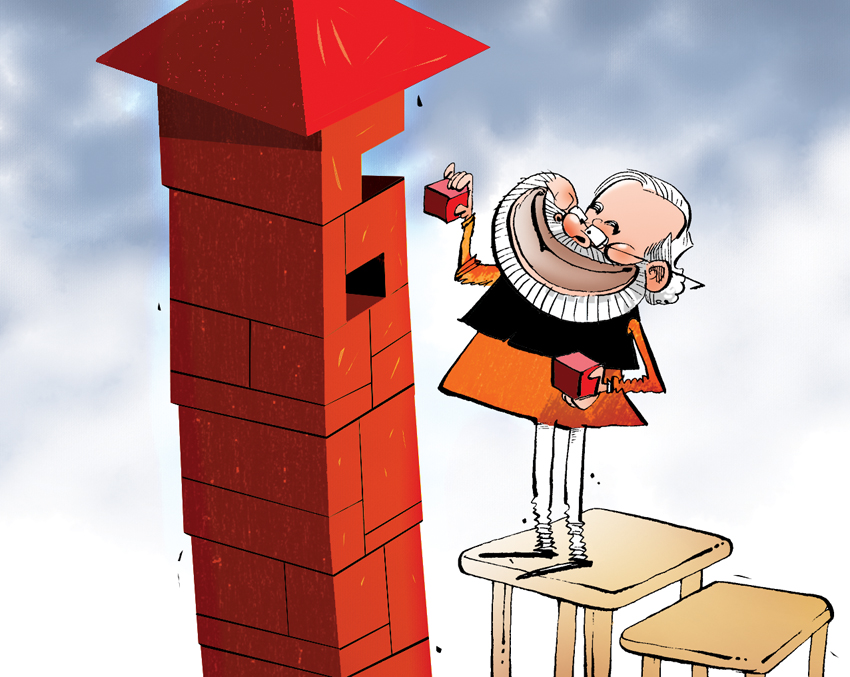 Moody’s: Glass half full – Upgrade vindicates fundamentals, but for economy to take off bold reform steps are needed

Last week when Moody’s, one of the world’s top three credit ratings agencies, raised India’s sovereign rating after nearly 14 years, the responses to it demonstrated the nation’s sharply divided politics. While the government understandably tom-tommed it as proof that its policies were succeeding, opposition leaders almost universally derided it.

In reality, it is indeed a vindication of improvements in the fundamentals of India’s economy. It will ease access to credit, help attract investment, and boost job creation. While this is surely cause for some celebration, hubris is best avoided. There is still immense struggle ahead over many years if India is to overcome its economic and human development challenges.

Ratings agencies are far from infallible. Indeed, Moody’s itself had been criticised for not catching the problems at Lehman Brothers, the Wall Street firm it had rated highly, whose collapse in 2008 precipitated the global financial crisis. But they were not alone, with the other two ratings majors – Fitch, and Standard & Poor’s (S&P) – also being in the same boat.

Subsequently, they have had to work hard to reestablish credibility. For instance, S&P claimed to “have spent approximately $400 million to reinforce the integrity, independence and performance of our ratings. We also brought in new leadership, instituted new governance and enhanced risk management.”

Regulatory changes too have tightened norms and increased oversight, such as the US Dodd-Frank Wall Street Reform and Consumer Protection Act. Though some critics still pan the ratings process, the fact is that risk evaluations by independent agencies remain crucial to how capital is allocated throughout the world. Finally, the proof of the pudding lies in the eating: no respectable lender or investor of consequence will act without a credit rating.

Thus, questioning ratings firms’ evaluations might have been justifiable a few years ago, or even today in relevant industry or academic forums with specific procedural challenges. But sneering at them broadly, that too only when triggered by the country’s rating upgrade, reeks of partisanship. In fact, since some of the critics would gladly have turned metaphorical cartwheels to get a ratings uptick if they were in government, it might even be seen as churlish.

The ratings improvement ought not to have come as a surprise to any neutral observer of the Indian economy. This column, for one, has on several occasions bucked the generally gloomy trend of commentary since demonetisation to recognise contrarian, positive changes taking place. There were also unmissable external clues, including praise from the International Monetary Fund (IMF) and India’s unprecedented 30-place jump in the World Bank’s annual ease of doing business index just a couple of weeks ago.

However, India’s potential for growth is even higher, as is our desperate need for it. China, the only other billion plus population nation, had a similar per capita income level as India in the late 1970s. But four decades of sustained high growth has taken the size of its economy to five times of India’s. That has helped China to do much better than us in reducing poverty and creating jobs.

India has missed the bus on earlier occasions to put policies in place for sustained high growth rates, but there is now a historic fork in the road. Chinese growth has been plateauing, and global financial markets currently deem that country’s commitment to reform inadequate. China’s aggressive foreign policy has also raised hackles. Both economics and geopolitics have conspired to give us another opportunity to get our act together.

For that to happen, many significant hurdles will have to be overcome. Take, for example, the PM’s declared goal of getting India into the top 50 in the World Bank ease of doing business index. Despite dramatic improvements this year on several measures, India still ranks a lowly 181 (out of 190 nations) on dealing with construction permits. And 164 on enforcement of contracts.

Some of these could be tackled administratively, and steps are apparently already being taken to have dedicated courts for commercial disputes. Others, like the Goods and Services Tax (GST) will require even more simplification than the many steps already taken in recent weeks. If 90% of items could be taxed at one rate, say 15%, and filings and refunds further simplified, the effects would be substantial.

But the really big-ticket items will require legislative changes, and therein lies the rub. Two of the biggest hurdles to investment, economic growth and job creation are the impossibly complicated land acquisition law, and obsolete, counterproductive labour laws.

For now, this government seems to have concluded, like its predecessors, that it would cost too much political capital to take these head on. So it has been left to the states, a few of which are attempting tentative, baby steps.

Demonstrable success in any state would stir competition and emulation by others, gradually boosting the national economy. But for a dramatic, and quicker, raising of the trajectory, there is no alternative to taking the bull by the horns in Parliament.