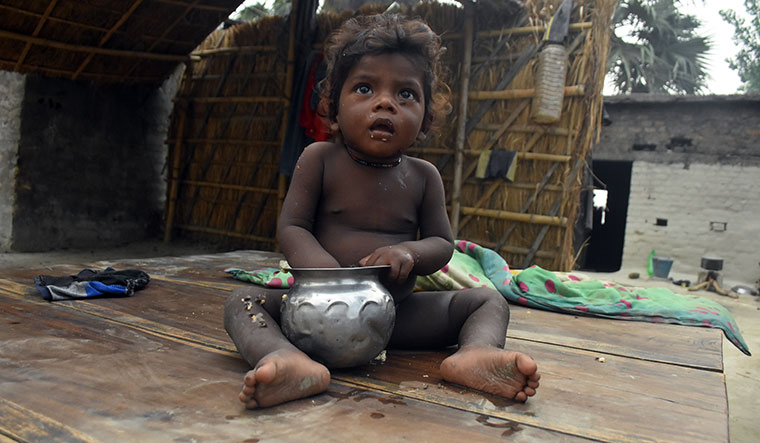 Eradication of malnutrition likely to happen sooner than projected

India is today one of the fastest-growing economies in the world, and on a clear trajectory of becoming the world’s third largest in the foreseeable future.

As the saying goes, with great opportunities come great challenges. One such challenge is ensuring that this growth reaches and benefits everyone, especially those at the bottom of the pyramid. Another major challenge is that of malnutrition. Though malnutrition has been witnessing a drop in India, it has not kept pace with economic development. Eradication of malnutrition is one of the priority areas of the Narendra Modi government.

This pandemic has revealed the need for what the PM has been calling to attention for years—a much more focus on public hygiene through the Swachh Bharat campaign. Along with it is the need to make sure no one sleeps hungry at times like these, and this led to the government introducing Pradhan Mantri Garib Kalyan Anna Yojana. Around 80 crore people have been covered under this currently, receiving highly subsidised food grains. Both these programmes, along with many others, have a common end goal, and that is the eradication of malnutrition.

While it may appear that hygiene may not have much to do with combating malnutrition, it is important to understand that malnutrition isn’t just the result of inadequate food intake, but also caused due to infections resulting from unhygienic drinking water, poor sanitation, and lack of access to healthcare.

Fighting malnutrition is one of the key priorities of the present government. Various schemes have been initiated by combined ministries of women & child development (MoWCD), and health & family welfare” (MoHFW).

The MoWCD, in association with the Bill & Melinda Gates Foundation and Deendayal Research Institute, is developing a POSHAN atlas under POSHAN Abhiyan which is PM Modi’s multi-ministerial convergence mission with the vision to ensure the attainment of malnutrition-free India by 2022. It focuses on nutrition of children, women, and pregnant mothers in impoverished areas, and the government appears to be looking at community level management of the problem. The key focus is to combat SAM (severe acute malnutrition), which is a major culprit behind deaths of children under five years of age. ‘POSHAN Maah 2020’ was dedicated to identification and management of SAM children using a granular community-based approach.

Addressing factors such as lack of mothers’ knowledge and inappropriate feeding practices, and the social and economic policies, is key in efforts to reduce infant malnutrition. Research has also proven how MGNREGA was associated with reduced infant malnutrition possibly mediated indirectly via improved birth weight rather than by improved infant feeding.

The government, in cognizance of this fact, has announced allocation of Rs 40,000 crore to the Mahatma Gandhi National Rural Employment Guarantee Scheme (MGNREGS) over and above the budgetary allocation of Rs 61,500 crore.

On World Food Day, (a fortnight ago), the PM released 17 bio-fortified varieties of eight crops which can increase the nutritional value of food staples several folds. The rice variety CR DHAN 315 has excess zinc, the wheat variety HD 3298 is enriched with protein and iron while DBW 303 and DDW 48 are rich in protein and iron.

Data suggests that the cost of treating malnutrition is 27 times more than the cost of its prevention. So, the Modi government is bringing in various reforms to mitigate the effects of malnutrition which in due course will lead to its eradication. In fact, the ministry of women and child development, in consultation with relevant ministries and stakeholders, is working on a new set of guidelines for tackling malnutrition under the Poshan Abhiyan programme for the states to follow.

Among reforms, one worth mentioning will be the recent farm bills which also forms an important part in the fight against malnutrition, which the opposition is vehemently opposing at all levels. Even though India presently is a food surplus state, it does not necessarily translate to preventing hunger. So, access to poor people had to be addressed and this bill exactly does the same. The farmers now need not go through the traditional APMC mandis so sell their produce.

This removal of restriction will allow the produces to be more accessible, thereby providing better options for consumers and better prices for farmers which will translate into adequate remuneration, which is one of the primary needs in eliminating poverty.

As a Member of Parliament over nearly two decades, on various occasions and platforms, I have been outspoken about the malnutrition problem in the country. Along with several fellow parliamentarians and other influential personalities, we formed a high-level advocacy group known as The Citizens’ Alliance against Malnutrition (CAAM). The goal of the alliance was to raise its voice against malnutrition in the country so that collective national consciousness can be converted into action to address and eliminate the menace of malnutrition.

To address malnutrition among pregnant women, there needs to be regular follow-up, possibly every trimester. Also, after marriage, at the gram sabha level, ASHA workers can provide counselling about how to conceive and the importance of nutrition at the time of pregnancy. There can be folic acid and iron supplementation for better nutrient intake.

Another alternative is Universal Basic Income (UBI), which I have been promoting since my parliamentary days. I have always held that UBI could be more affordable in India than in a high-income nation like the United States or Switzerland.

There are positive changes already visible. Malnutrition in children has seen improvement in the last two fiscal years and has reduced by two per cent per annum, according to a combined survey conducted by UNICEF and the ministry of health. The rate of stunting of children in India fell from 38.4 per cent in 2015-16 to 34.7 per cent in 2017-18. This plunge of two per cent each year is mainly on account of government initiatives. With such positive trends, we can be sure about the eradication of malnutrition much sooner than had been projected just a few years ago.

The writer is the national vice president BJP. The opinions expressed in this article are those of the author’s and do not purport to reflect the opinions or views of THE WEEK