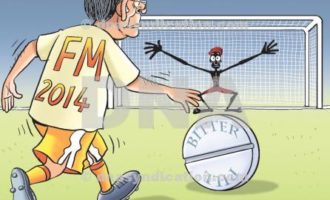 Image Source - By Manjul from dnasyndicatio.com

After toiling with the sluggish Hindu rate of growth for decades, India saw an inflection of sorts with the critical neo-liberal reforms. The country experienced one of the most impressive growth spurts in the global history and became the second fastest growing economy, ranking next to China.

Secondly, the economic growth in India has not achieved much in terms of reducing human deprivations. While the thriving development in East Asian economies was able to drag much of its population out of poverty, few rarefied benefitted from India’s booming economy. Noted economists Amartya Sen and Jean Drèze point that though some privileged classes have been successful in improving their standard of living, a major section of the population continue to lead unnecessarily deprived and precarious lives.[2] The social and human development indicators have fallen relatively short in matching the rapidly rising economic growth rates, hence questioning the credibility and sustainability of this growth.

In the recent years, owing to the global economic meltdown, India began slipping its hold on the economic numbers too. While the towering scams, corruption and draconian taxation polies corroded the investor’ sentiment, poor governance and inability to implement welfare policies has led to internal discord. People sought change, economic opportunities and development over welfare freebies.

Bharatiya Janata Party (BJP) led by Narendra Modi caught the fancy of the ambitious youth and the emerging urban neo-middle class, with its promise of bold economic reforms and revival of lackluster Indian economy. The result was sweeping victory for the party in the 16th Lok Sabha polls. The clear outcome of the polls and emergence of majority government freed the country from the shackles of weak coalition government and regional or caste-based politics.

However, great challenges lie ahead of Mr. Modi in rolling out the economic reforms. The most critical issues that must be addressed are: inflation and real growth, employment and abridging disparities.

Fiscal prudence is critical for anchoring high inflation. However, the government spending cannot be significantly curtailed, as employment generation is indispensible. A fine balance ought to be maintained while tampering with fiscal deficit keeping in line with looming demographic dividend.

Retail inflation driven by food and fuel prices can be largely attributed to supply-side constraints, and may not respond well to increase in policy rate since the demand for food and fuel items is fairly inelastic. Complex factors like export of domestic food grains to international markets, crop failure in vegetables and high costs of production, storage and transportation cause food inflation and international instabilities in oil exporting countries, depreciation of domestic currency etc. lead to fuel inflation. These factors would not be impacted at all by a high effective rate of borrowing. In fact, the economy may be pushed into a stagflation (a combination of stagnation and inflation) by a tight monetary policy- since it would slow down economic activity by slowing extension of credit.

Hence, a tougher anti-inflation policy would be beneficial but not sufficient. It must be accompanied with other measures such as temporary subsidies, export restrictions and mechanisms of public provision to target food prices and temporary tax cuts could be considered to control fuel prices. In the long run, central bank’s tight monetary policy will cause the country’s currency to strengthen- reducing oil import bills and fuel prices. Also, a sustained period of tight monetary policy will cause the expected inflation rate in the economy to be revised downwards, driving actual inflation down as well.

Next in order to create jobs, the rigid labor laws need amends. To create a wave of industrialization and manufacturing, strong reforms with respect to land, connectivity, power and bureaucracy are needed. These factors often bedevil potential efforts to improve infrastructure. Cooperation would also be needed from State Governments as many of the labor laws and aforementioned factors fall under their purview.

Lastly, it must be ensured that resources generated with this impending growth are systematically directed to expand education, health care, social amenities, human capability, etc. It is critical that the standard of living is raised across strata and not for certain elite classes.

The Government under the leadership of Modi as the Prime Minister has started work on these reforms. The Union Budget 2014-15 started the process of rationalization of taxes and widening of tax bases. The Monsoon Session of the Parliament passed one of the first labor reform bills (Apprentice Amendment Act, 2014) and two others were introduced.

However, the critics have already started writing off Modi’s pro-market reforms for not being bold enough. His maiden (and unconventional) Independence Day speech, where he raised several important social concerns, was critiqued for being clamored with style and rhetoric, lacking any concrete direction. Others believe he has got too involved in raveling foreign policy to focus on development.

It is must be understood that India with all its complexities is not easy to govern. The government cannot steam roll bold pro-business reforms, ignoring the bulk of its population living in desolate conditions. The economic growth must be paced well with the improvement in the living conditions of these people who have witnessed unremarkable up gradation in standard of living. It is too early to get restless or loose this newly found optimism. One must give the new government and the new leader some fair amount of time to get India back on track.